Dwarves are short, tough and mighty.  They are well known for patronizing
bars and taverns, and tales of their drinking skills are legendary.  They
are also known for their ferocious fighting and stubbornness.  Dwarves are
not taken to flights of fancy, but neither are they totally grim and
humorless.  Family history, clan and personal honor are of utmost importance
to the dwarven race.  Dwarves are also well known for their honesty, almost
to the point of bluntness, and would be a valuable ally and friend, or a
fearsome enemy.  Dwarves are shorter than most humanoids, standing anywhere
from three to four and a half feet in height.  Their frames are very stocky
and muscular.  Dwarven men value facial hair, and rarely ever shave it.
Instead, their beards are worn long, with braiding and other such
ornamentation.  It has been said that dwarf women also grow beards, but this
absurd notion would earn anyone so foolish to ask a firm slap in the teeth.
Dwarven hair colors are normally black, brown, blonde or red, but dwarves
usually go grey quite early.  Eyes can also be any color.  Dwarves have no
love for the evil races of the world, but their hatred of orcs (their
ancestral enemies) is almost unrivaled.  Very rarely will a dwarf be civil
with an orc.  Dwarves are naturally good, and often wonder why the hell
everyone else can't be.  The dwarven constitution for alcohol is legendary.
With mighty draughts that would fell a normal man, a dwarf is just getting
warmed up.  When in this drunken rage, it is said that a dwarf can fight
better and takes less damage from hits.  They also are unhindered while
walking and do not stumble about as other races do while intoxicated. 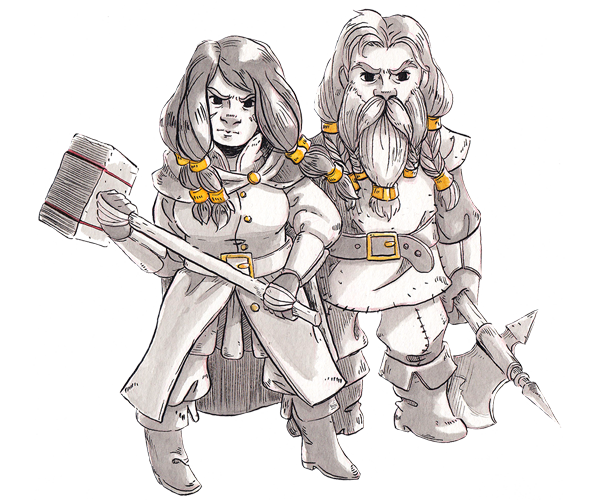